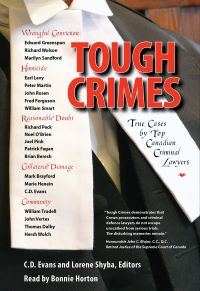 Tough Crimes is a collection of thoughtful and insightful stories by twenty prominent criminal lawyers. In the book, they write about cases that had surprising turns, or that presented personal or ethical challenges. We’ve all heard the media’s take on notorious criminals, but when have we had a chance to hear directly from the lawyers who defended or prosecuted them? We’ve all lamented the fate of a person who we think was wrongfully accused, but who better to explain what happened than his or her counsel who was there for the client every step of the way. In the book, Edward Greenspan writes on a miscarriage of justice; Richard Wolson and Marilyn Sandford on the wrongfully convicted; Earl Levy on the Toronto Shoeshine Boy murder; Peter Martin on a study of evil; John Rosen on defending Paul Bernardo; Fred Ferguson on child abuse; William Smart on a “Mr. Big” sting; Richard Peck on Air India; Noel O’Brien on corpora delicti; Joel Pink on the Antigonish Beech Hill murders; Brian Beresh and Patrick Fagan on reasonable doubt; Mark Brayford on Robert Latimer; Marie Henein on the wrongfully charged; C.D. Evans on weighing moralities; William Trudell on the Walkerton water treatment disaster; forensic psychologist Thomas Dalby on the Taber school shootings; John Vertes on aboriginal justice; and Hersh Wolch on a young prosecutor’s trial by fire.