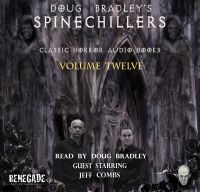 Volume 12 begins with Doug Bradley's well-researched insight into the stories and their authors. This is followed by what H. P. Lovecraft considered to be one of his best stories, "The Music of Eric Zann". "The Tool" by W. F. Harvey is a horrifying tale narrated by an inmate of a mental institution. Next Edgar Allan Poe revisits his terrifying fear of being buried alive in "The Premature Burial". Then an eavesdropper overhears five creepy and scary ghost stories in Charles Dickens "To Be Read at Dusk". Ambrose Bierce's haunting "The Moonlit Road" relates a murder tale from three perspectives, including the murdered wife's. Jeffery Combs reads Part 5 of "Herbert West Reanimator" and this volume is completed with Edgar Allan Poe's "Dreamland". The poem describes the strange sights the speaker sees along his journey in a different and disturbing world.

famous author of classic horror and stories of suspense