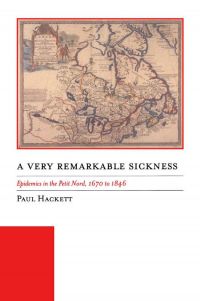 The area between the Great Lakes and Lake Winnipeg, bounded on the north by the Hudson Bay lowlands, is sometimes known as the "Petit Nord." Providing a link between the cities of eastern Canada and the western interior, the Petit Nord was a critical communication and transportation hub for the North American fur trade for over 200 years.Although new diseases had first arrived in the New World in the 16th century, by the end of the 17th century shorter transoceanic travel time meant that a far greater number of diseases survived the journey from Europe and were still able to infect new communities. These acute, directly transmitted infectious diseases – including smallpox, influenza, and measles – would be responsible for a monumental loss of life and would forever transform North American Aboriginal communities.Historical geographer Paul Hackett meticulously traces the diffusion of these diseases from Europe through central Canada to the West. Significant trading gatherings at Sault Ste. Marie, the trade carried throughout the Petit Nord by Hudson Bay Company ships, and the travel nexus at the Red River Settlement, all provided prime breeding ground for the introduction, incubation and transmission of acute disease. Hackettís analysis of evidence in fur-trade journals and oral history, combined with his study of the diffusion behaviour and characteristics of specific diseases, yields a comprehensive picture of where, when, and how the staggering impact of these epidemics was felt.

Paul Hackett is a medical geographer at the University of Saskatchewan.