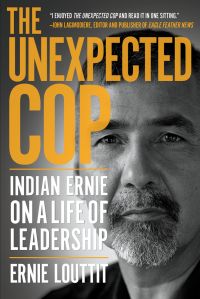 The cop who blew the whistle on Saskatoon’s notorious “Starlight Tours,” Ernie Louttit is the bestselling author of two previous “Indian Ernie” books. He demonstrates in this latest title that being a leader means sticking to your convictions and sometimes standing up to the powers that be. One of the first Indigenous officers hired by the Saskatoon Police, he was an outsider who became an insider, with a difference. A former military man with a passion for the law, he was tough on the beat, but was also a role model for kids on the streets.

Ernie Louttit is a retired soldier and police officer, and has written two books, Indian Ernie: Perspectives on Leadership and Policing and More Indian Ernie: Insights from the Streets. He resides in Saskatchewan.