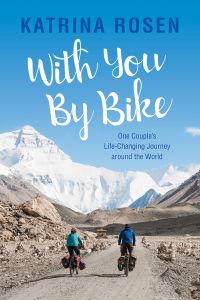 After many years together Katrina and Mike's marriage has unravelled. In a quest to mend their relationship they embark on a year long, 13,000 kilometre cycling tour with the hope of strengthening their commitment to one another.

Katrina is an adventure athlete who craves the wild; her husband, Mike, watches sports with his buddies. Like many couples, after 11 years in a relationship they’ve grown apart and have become mere acquaintances, as opposed to husband and wife. When they hit rock bottom they realize it's time for a change and they make the dramatic decision to travel the world by bike.

The couple ride through barren landscapes, scorching fires, and humid jungles. From backcountry roads in New Zealand, sharing a picnic with a man and his multiple wives in Malaysia, or camping at an orphanage in Cambodia; at every turn, they are touched by locals who feed them stories and laughter. Together they repair 54 flat tires, navigate heat exhaustion in Vietnam, altitude sickness in Tibet, and two robberies before they face the last hard climb to the world’s tallest mountain.

With You By Bike is honest and raw, describing Katrina’s search for forgiveness, acceptance, and change. It’s about rediscovering choice from the seat of a bicycle, exploring the world, and finding love by veering off the beaten path.

Katrina Rosen loves the outdoors. Along with her husband, Mike, they’ve raised their son to believe it’s entirely normal to sleep in huts and tents as often as your own bed, and to spend as much time as possible biking, skiing, hiking, and playing. Eager to share her passions and inspire others, Katrina works as a hiking and cycling guide in the Rocky Mountains, opening up her guests’ minds to the forgotten possibilities in life. When she’s not roaming through the wilderness or competing in ridiculously long races, she can be found curled up by a fire with a cup of coffee, poring over maps and dreaming up adventures. Katrina and her family live in Canmore, Alberta.