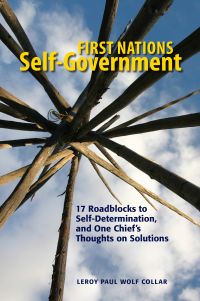 Indigenous Peoples in Canada are continuing to assert their right to self-determination in this era of reconciliation. While dozens of Indigenous communities have signed varying forms of self-government agreements with the federal government, Indigenous Nations still face many obstacles along the path to true self-determination.

As a former Chief of Siksika Nation in southern Alberta, Leroy Wolf Collar dealt with many of the same problems other Indigenous Nations face across the country. From serious housing shortages to the lack of opportunities for youth, Chief Wolf Collar experienced the challenges and frustrations that come from operating in a colonial system still constrained by the Indian Act.

How do Indigenous Peoples move on from this defective system? Chief Wolf Collar identifies 17 issues that currently hinder Indigenous Nations—including broken treaty promises, problems with common forms of band administration, and the intrusion of provincial governments—along with potential solutions to overcome them.

This guide is for current and aspiring Indigenous leaders who want to increase their understanding of good governance, management, and leadership, as well as those who want to explore issues around Indigenous self-determination in Canada.

Leroy Wolf Collar is a member of Siksika Nation in southern Alberta, where he served as a Band Councillor from 1993-2007 and Chief from 2007-2010. In 2008, he was honoured for his service with a leadership award from the Aboriginal Role Models of Alberta. Leroy has a BA in Indigenous Studies from the University of Lethbridge, numerous management and leadership certificates from Mount Royal University, and a certificate from the Banff Centre’s Aboriginal Leadership and Management Development Program.