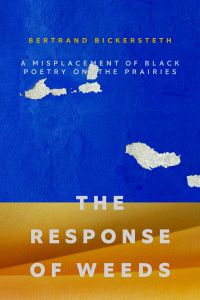 Bertrand Bickersteth’s debut poetry collection explores what it means to be Black and Albertan through a variety of prisms: historical, biographical, and essentially, geographical. The Response of Weeds offers a much-needed window on often overlooked contributions to the province’s character and provides personal perspectives on the question of Black identity on the prairies. Through these rousing and evocative poems, Bickersteth uses language to call up the contours of the land itself, land that is at once mesmerizing as it is dismissively effacing. Such is Black identity here on this paradoxical land, too.

Born in Sierra Leone, Bertrand Bickersteth grew up in Edmonton, Calgary, and Olds, Alberta. After an English degree at UBC, Bertrand continued studying in the U.K. and later taught in the U.S. A return to Alberta provided him with new insights on black identity and most of his writing has been committed to these perspectives ever since. Although he writes in several genres, anticlimactically, the topic is always the same: what does it mean to be black and from the prairies? He has also given many public talks including a TED Talk for BowValleyCollegeTEDx called The Weight of Words. His poetry has appeared in several publications, including most recently The Antigonish Review, Cosmonauts Avenue, and The Fieldstone Review. He has also been published in The Great Black North and the forthcoming

for the CBC Poetry Prize. He lives in Calgary, teaches at Olds College, and writes everywhere.