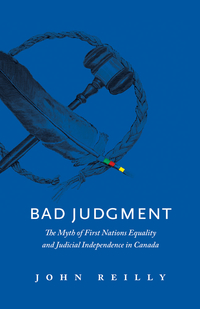 During his 33 years as a circuit judge for the Provincial Court of Alberta, John Reilly became interested in aboriginal justice and the failure of the “white” legal systemto deliver justice for Aboriginal people. He recognized the harm caused to Nativepeople by Canadian colonialism and the failure of all levels of government, includingtribal government, to alleviate their suffering and deal with the conflicting natures ofEuropean-style law and indigenous tradition and circumstance.

His first book, Bad Medicine: A Judge’s Struggle for Justice in a First NationsCommunity, was a Canadian bestseller that sparked controversy and elicited praise nationwide for its honest portrayal of First Nations tribal corruption and the conflict Reilly had become embroiled in. With Bad Judgment Reilly details his battle with the Canadian justice system and the difficulties he faced trying to adapt Eurocentric Canadian law for the benefit of First Nations people across the country.

John Reilly was appointed to the bench at age 30 and had the distinction of having been the youngest Provincial Court Judge in Alberta history. At age 50 he made a promise to himself that he was going to improve the delivery of justice to the Stoney Nakoda First Nations at Morley, Alberta. After 35 years in public service, Reilly retired in 2012. He lives in Canmore, Alberta.