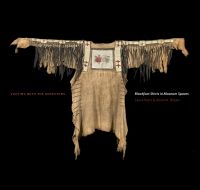 In 2010, five magnificent Blackfoot shirts, now owned by the University of Oxford’s Pitt Rivers Museum, were brought to Alberta to be exhibited at the Glenbow Museum, in Calgary, and the Galt Museum, in Lethbridge. The shirts had not returned to Blackfoot territory since 1841, when officers of the Hudson’s Bay Company acquired them. The shirts were later transported to England, where they had remained ever since. Exhibiting the shirts at the museums was, however, only one part of the project undertaken by Laura Peers and Alison Brown. Prior to the installation of the exhibits, groups of Blackfoot people—hundreds altogether—participated in special “handling sessions,” in which they were able to touch the shirts and examine them up close. The shirts, some painted with mineral pigments and adorned with porcupine quillwork, others decorated with locks of human and horse hair, took the breath away of those who saw, smelled, and touched them. Long-dormant memories were awakened, and many of the participants described a powerful sense of connection and familiarity with the shirts, which still house the spirit of the ancestors who wore them. In the pages of this beautifully illustrated volume is the story of an effort to build a bridge between museums and source communities, in hopes of establishing stronger, more sustaining relationships between the two and spurring change in prevailing museum policies. Negotiating the tension between a museum’s institutional protocol and Blackfoot cultural protocol was challenging, but the experience described both by the authors and by Blackfoot contributors to the volume was transformative. Museums seek to preserve objects for posterity. Visiting With the Ancestorsdemonstrates that the emotional and spiritual power of objects does not vanish with the death of those who created them. For Blackfoot people today, these shirts are a living presence, one that evokes a sense of continuity and inspires pride in Blackfoot cultural heritage.

Laura Peers is interested in the meanings that heritage objects hold for Indigenous peoples today and in relationships between museums and Indigenous peoples. Her publications include Museums and Source Communities (with Alison K. Brown), “Ceremonies of Renewal: Visits, Relationships and Healing in the Museum Space,” and This Is Our Life: Haida Material Heritage and Changing Museum Practice (with Cara Krmpotich).

Alison K. Brown’s research addresses the ways in which artifacts and photographs can be used to think about colonialism and its legacies. Before joining the Department of Anthropology at the University of Aberdeen in 2005, where she is a senior lecturer and co-director (with Nancy Wachowich) of the Northern Colonialism: Historical Connections, Contemporary Lives program, she was Research Manager for Human History at Glasgow Museums.